There are four types of White Pitbulls and in this article, we have done the most extensive research on different kinds of white Pitbulls you can pick from, in case you are looking for your ideal pet. The name ‘white Pitbull’ is an umbrella term that refers to several dog breeds, including the American Bully, American Pitbull Terrier, American Staffordshire Terrier, and the Staffordshire Bull Terrier. You can also check out our reviews of the best dog food for Pitbulls available in the market today.

To begin with, Pitbulls terrier dogs are remarkably loyal, gentle, loving, playful, and eager to please their owners. Unluckily, there are lots of half-truths and misperception surrounding Pitbulls which go back to the past when they were used in vicious dog fighting sports. In fact, most people still think of Pitbulls as the aggressive ring bullies which has caused fear and ban.

As we review the types of white Pitbulls today, we want you to see the sweet-natured Pitbull with a big heart. We have included their history, mixes, pictures, and more for better insight.

How Many Types of White Pitbulls are there?

As mentioned above, there are 4 types of white Pitbulls including the:

All these dogs feature a muscular, solid build with large square heads, and deep chests. If you are looking for a dog that is terrifically determined to complete a given task, this is suitable for you. Pitbulls have no soft place for giving up which explains why they were misused in the past.

Overall, Pitbulls love being around people, even strangers, and enjoy playing with family. Like any other dog breed, however, Pitbulls should be trained from their pup stage as they can be difficult to handle when they get bigger and stronger.

Before we dive any deeper, how about their history?

History of the Pitbulls

Pitbulls have a history that dates back to the early 1800s in the United Kingdom (U.K.) and were first bred from Old English Bulldogs. These dogs had increased popularity on the British Isles in bull baiting, a brutal blood sport where they would tease a bull till it fell from exhaustion or injuries.

This bull and bear baiting game was banned through the 1835 Cruelty to Animals Act by the British Parliament. After that, people turned to ratting (throwing rats in a pit and then Pit Bulls would kill them) and dogfighting sports which were done underground. And although Pitbulls were ruthless towards their opponents (other dogs), they were trained not to attack humans. Now that explains where their love for humans started.

When the Civil War came to an end, British settlers made their way to America accompanied by their fighting dogs in the 1870s. The American dogfighters used these dogs to create a much larger and robust fighting dog breed. This breeding led to the birth of the American Pitbull Terrier, American Staffordshire Terrier, and the American Bully.

Due to their vicious past, some Pitbull types of dogs are accepted only by some Kennel Clubs while others are recognized by all Kennel Clubs. The American Kennel Club, however, does not recognize Pitbulls as a dog breed but that does not affect their popularity.

Thanks to the continued breeding and training to remove the hostility in these dogs, Pitbulls continue to receive more positive media attention.

When looking for a pooch under the Pitbull category, a white Pitbull is the most sought after type. And this makes sense because if you blend their big personality with the striking white coat color the result is magnificent. Nothing comes close to cuteness like a white Pitbull.

If you are reading this, it means that you do not share the same misperception regarding Pitbulls and want to have a white Pitbull for a companion or family dog. Well, at least we are on the same page on that. By the end of this review, you will have made your choice.

Let us have a look at the four types of white Pitbulls:

The Staffordshire Bull Terrier is supposedly Great Britain’s most popular dog and we are sure it stands as America’s 80th most common breed. Known for their muscular build and might mixed with a big personality, these affectionate dogs make excellent, playful family dogs.

Also known as Staffies, they are recognized by all major Kennel Clubs such as the United Kingdom Kennel Club (UKC) and the American Kennel Club (AKC). Staffordshire Bull Terriers are the smallest in the group standing at 14 to 16 inches in height and weigh between 24 lbs. to 38 lbs.

Staffies have a short and slightly wiry coat that lays flat on their body and feature a silky gloss as well as brown, black, red, or multicolored eyes. Their head is of medium length with a very broad skull; deep muzzle, medium or small ears, and evenly muscled broad shoulders.

Staffordshire Bull Terriers have a life expectancy of 12 to 14 years and their puppies are quite expensive at $1500 to $2000 on average.

Yet another popular Pitbull terrier in the US, the American Staffordshire Terrier ranks at the 85th position. Research, however, indicates that the breed is much more popular than that only that owners do not register after purchase. All in all, the dog stands among America’s favorite dogs.

By the way, did you know that the American Staffordshire Terrier was America’s most honored war dog? Usually shortened to AmStaff, the dog is only acknowledged by the AKC and not the UKC and has been the companion of 3 American Presidents. AmStaffs stand 17 to 19 inches tall and weigh between 40 lbs. and 70 lbs.

White American Staffordshire Terriers are loyal, loving, and playful dogs that love spending time with their family members making them superb family pets and companions. These good-natured dogs have a short, smooth coat that is fairly easy to groom. They have a broad head, well-defined jaws, pronounced cheekbones, and their eyes are dark, round and set wide apart.

American Staffordshire Terriers have a life expectancy of 12 to 16 years and their puppies are also expensive at $1200 to $2000.

Probably the most popular dog in the Pitbull terrier category, the American Pitbull Terrier (APBT) is what comes to mind when you hear the word Pitbulls. And although this dog is not recognized by the AKC, the UKC does acknowledge the APBT. Research has shown that this dog has upheld his breed type for more than 150 years which is why the UKC recognize it as a purebred. 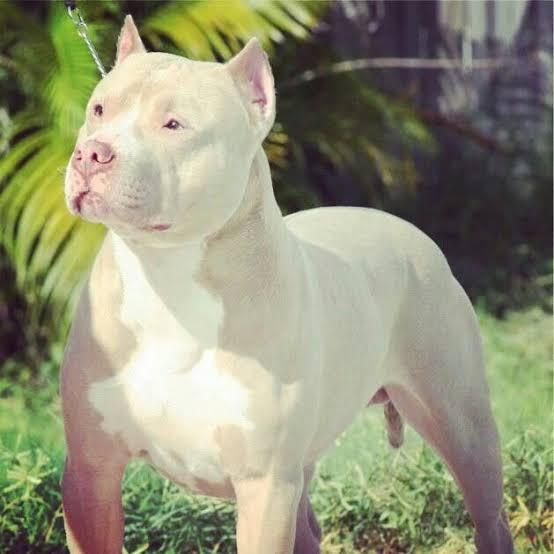 Did you know that the white American Pitbull Terrier is among the tallest in the four Pitbull breed category? These athletic capabilities would explain why the APBT was commonly used in dogfighting sports and why they are not that good with other dogs as with the rest. The APBT stands 17 to 19 inches tall and weighs between 30 lbs. and 85 lbs.

The white American Pitbull Terrier is intelligent, friendly, strong-willed, obedient, and loving which makes it a great choice for a family dog and companion. Although they are great, they are best suited for active people who will give them a lot of attention. Their short, shiny, and stiff coats require little grooming.

American Pitbull Terriers have a life expectancy of 8 to 15 years and the puppies cost between $500 and $1000. They are available in two types, including the Red Nose APBT and the Blue Nose APBT.

An offspring of the American Pitbull Terrier, the white American Bully has a history that dates back to the 1980s and stands out amongst other Pitbulls in this list. This dog has, over time, shown unique looks which makes him be recognized as a separate dog breed and he deserves it. 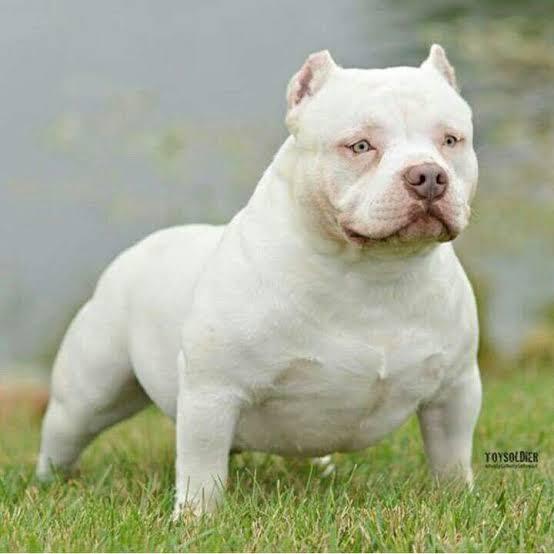 The American Bully is one of the dogs that are recognized by both the UKC (2013) and the AKC (2004) that recognizes four sizes including Pocket, Standard, Classic, and XL. This dog is shorter than his APBT parent and much broader than the other Pitbulls in our article. American Bullies stand 13 to 21 inches tall and weigh between 70 lbs. 120 lbs.

Although they might look scary and aggressive, those who own American Bullies say that they are outgoing, sociable, nosey, and can hardly attack kids due to their pain tolerance. As such, they make excellent companions and family dogs. They have a smooth, short-haired coat which is easy to groom.

There is no difference in Pitbull heads. All white Pitbulls feature a square-shaped head with big eyes that have an almond shape and a square fleshy nose.

With their compact and muscle built, Pitbulls are loyal dogs that love fun and play which makes them admirable companions, especially for individuals that love daily exercise. You might be wondering how a Pitbull mix would be like, right? We know!

These are just a few examples of the many out there as you can mix a White Pitbull with almost any dog breed. You just have to check the prospective health issues of the parent dog breed and personalities that will calm the Pitbull terrier down.

Types of White Pitbulls with Pictures

Are you wondering what Pitbulls look like with a white coat color? Here are types of white Pitbulls with pictures:

White Pitbull can also be mixed with other dogs, including terriers to pacify their character. Overall, Pitbull mixes are smart, protective, and loyal dogs that tend to be very affectionate with their human families but standoffish towards outsiders. This makes them good guard dogs and companions.

Here are 6 examples of types of white bull terrier mixes:

In general, a white Pitbull terrier mix will make an excellent companion dog. all you have to check are the genetics of the puppy parents.

When you are talking about White Pitbulls, we thought you should understand the difference between albinism and Leucism. Why is this important? Because you might think that you have a real white Pitbull while the reality is that he is suffering from albinism.

Although albinism is an uncommon genetic mutation, you should know about it because it comes with a range of health issues. From dogs to plants and humans, albinism affects all living things. In dogs, albinism causes a complete lack of skin-color in the blood vessels, hair, eyes, and skin. Both parents must be albinos for a puppy to be one.

Pitbulls that are leucistic fall between albinism and true white color which makes them to be erroneously referred to as white Pitbulls. In this case, the dog has extremely low skin-color in their entire features and no melanin in their hair.

How to Tell if a Pitbull is Albino or Leucistic

It is easy to tell if your white Pitbull is albino or leucistic. On the one hand, an albino Pitbull’s blood vessels are transparent which means that their eyes will either be extremely light blue or translucent. A leucistic Pitbull, on the other hand, has deeper pink features and somewhat bluer eyes.

While it sounds easy, it is better to do medical tests to differentiate between the two. You will not be confused from today, right?

How rare is a White Pitbull?

A White Pitbull is rarer to find than most of the other colors which explains why (as seen above) their puppies have a high price tag. The other rare color is the merle pattern coat.

Regardless of the breed, all Pitbulls, including white-colored ones, have the same type of head that is square-shaped and almond-shaped eyes. And because they grow large and strong, make sure that you introduce training from puppyhood and check your dog for albinism and leucistic.

Hi there! My name is Ben Walker and I am the editor here at 10PetFood. I have 7 years of experience as a pet care professional in the New England region having spent time in various roles including a stint at a veterinary hospital in Upstate New York, Syracuse area. I am a certified pet care professional and mostly spend my time researching pet nutrition or walking my dog.